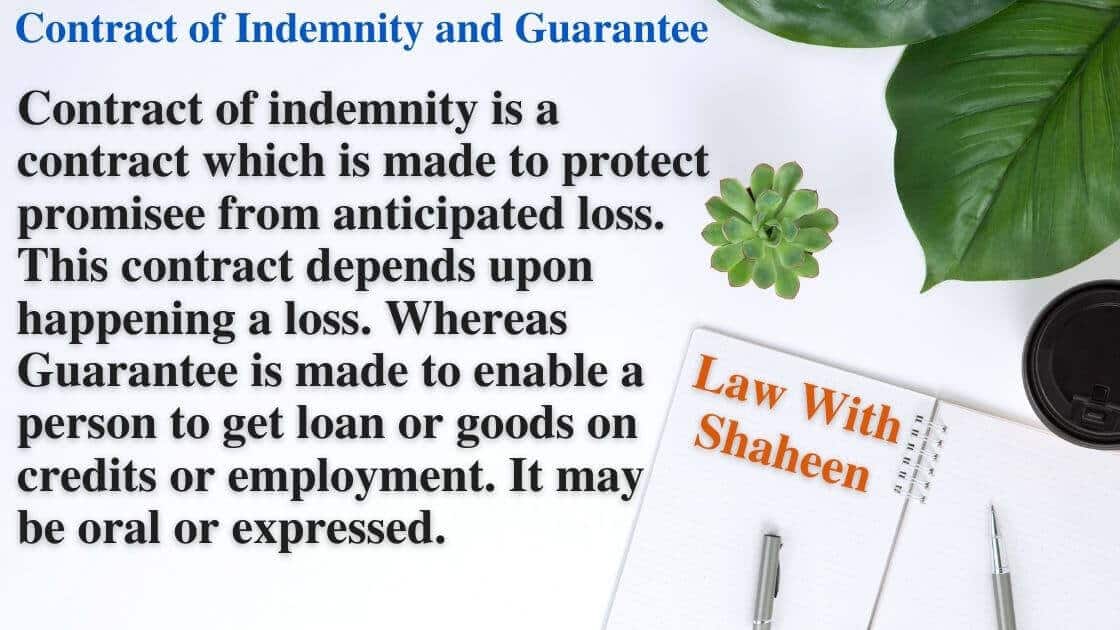 Contract of Indemnity and Guarantee:

Contract of indemnity is a contract which is made to protect promisee from anticipated loss. This contract depends upon happening a loss. Whereas Guarantee is made to enable a person to get loan or goods on credits or employment. It may be oral or expressed.

Indemnity means a promise to save a person from the harmful consequences of an act.

According to Merriam Webster Dictionary;

There are two parties in a contract of indemnity.

Indemnifier is a person who promises to make good the loss.

Indemnified or Indemnity holder is a person whose loss is made good.

Section 125 of the Contract Act,1872; an indemnity holder has the following three rights by which he is entitled to recover from the promisor.

All damages which he could be compelled to pay in any suit in respect of any matter to which the promise to indemnity applies.

All costs which he may be compelled to pay to bring or defending such suit.

All sums which he may have paid under the terms of any compromise of any such suit.

According to Merriam Webster Dictionary, the guarantee means, “an agreement by which one person undertakes to secure another in the possession or enjoyment of something”.

“A contract of guarantee is a contract to perform the promise or discharge the liability of a 3rd person just in case of his default.”

It is the person who gives the guarantee.

It is the person to whom the guarantee is given.

It is the person in respect of whose default the guarantee is given.

Read More: Rights and Duties of Seller and Buyer

Surety’s Rights Against the Creditor:

On paying off the creditor, the surety steps into his shoes and is entitled to all the securities which the creditor may have against the principal debtor whether the surety is aware of the existence of such securities or not.

Rights Against the Principal Debtor:

It is concluded that a contract of indemnity is a contract by which one party promises to save another from loss caused to him and contract of guarantee is a contract to perform the promise, to discharge the liability of a 3rd person just in case of his default.