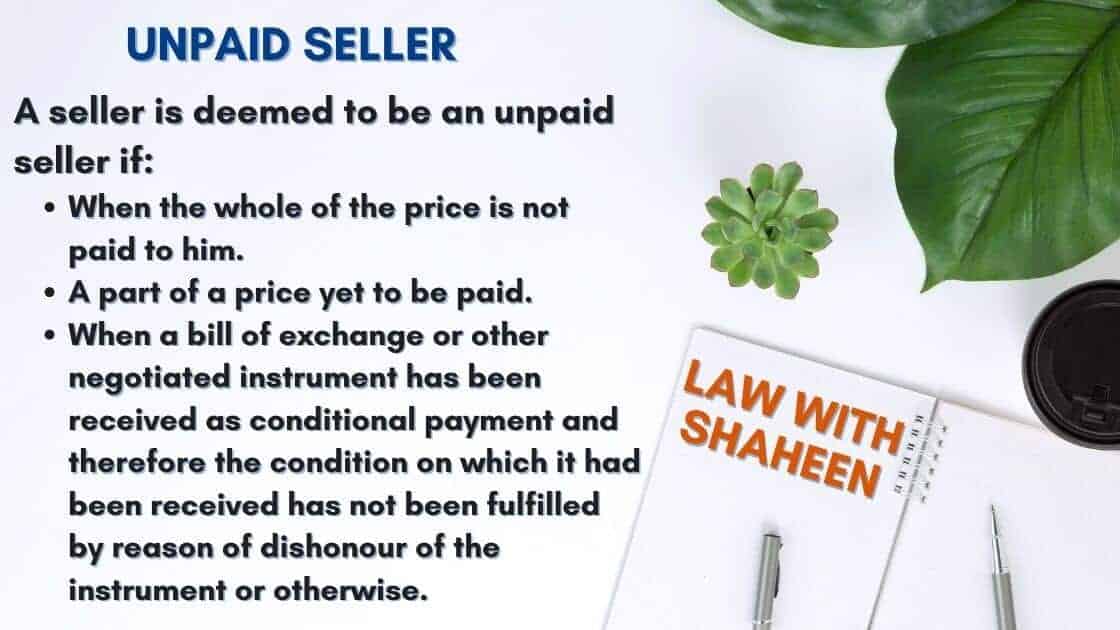 Under the Sale of Goods Act, of 1930, it is essential that in the contract of sale, the seller when selling his property or goods the seller becomes entitled to be paid consideration as agreed.

Sometimes it may happen that a transaction of Sale has taken place but the buyer without any valid reason refuses to pay the agreed consideration to the seller in whole or in part.

In such circumstances, the seller to whom the consideration has not been paid such seller is called an unpaid seller under the Sale of Goods Act, of 1930.

Related Post: Sale and Agreement to Sell and Its Essentials

“A seller is deemed to be an unpaid seller if:

Related Post: Rights and Duties of Buyer and Seller

An Unpaid seller is a person who sells out a property he owns or the property of the principal, or co-owner and does not get paid for that sale from the buyer.

Essentials of Contract of Sale:

There are certain essentials of a contract of sale which are:

1). Rights with regard to goods:

Lien means to retain the possession of goods. It is the first right of an unpaid seller with regard to the goods which means that whenever the buyer refuses to pay the agreed consideration to the seller.

Cases where the Right to lien can be exercised:

A right to lien can be exercised in the following cases:

“Where an unpaid seller has made part delivery of the goods/products, he may exercise his right of lien on the remainder, unless such part delivery has been made under such circumstances as to show an agreement to waive the lien”.

e.g. if 50 bags were to be given, 25 were delivered and the buyer becomes insolvent, the lien would extend to the remaining 25 bags.

Section 49 of the Sale of Goods Act, of 1930; talks about the termination of a lien. Lien depends on the physical possession of goods. Where possession is lost, the lien is also lost. The unpaid seller loses his lien in the following cases;

2). Right of Stoppage in Transit:

Requirement of stoppage in transit:

How stoppage in transit becomes ineffective:

1). The Interception by the buyer:

The right is deemed to come to an end when the buyer or his agent intercepts the transit.

The Moment the buyer is informed of the goods that the carrier is holding the goods on behalf of the buyer; the transit comes to an end.

When the carrier wrongfully refuses to deliver the goods to the buyer or his agent, the right of stoppage of goods in transit comes to an end.

When the buyer requests the carrier to carry the goods to a new destination after the original destination is reached, the right of stoppage of goods in transit comes to an end.

It is the third right of an unpaid seller to resell the goods to any third person if the buyer fails or refuses to pay the agreed consideration to the seller.

Rights against the buyer personally:

Where the ownership of goods has passed to the buyer and the buyer refuses or neglects to pay the price for the goods according to the terms of the contract the seller can sue him, irrespective of the delivery of the goods.

2). Suit for damages for non-Acceptance:

Where the buyer refuses or neglects to accept and pay for the goods, the seller may sue him for damages for non-acceptance of goods, however, the seller can recover damages but he cannot recover the full price.

In cases of anticipatory damages, the seller can even compel the buyer to perform his part of the contract. The Court can also force him to pay the amount due to the seller.

Where the buyer repudiates the contract of sale before the due date of delivery, the seller may either: